I had a nasty shock the other day. Three black paperbacks peeked innocuously from between Susan Hill and Rose Tremain. I thought nothing of it, as my wife has a paperback habit that she feeds through regular browsing on Amazon, and I never know what’s going to appear on the shelf next. But then I read about the publishing phenomenon that’s turning middle-class mothers into smut junkies, and something about the title rang a bell…

My wife cringes whenever I mention this. She bought them in all innocence, after Amazon offered them at three-for-two, flagged as ‘Amazon recommends’. Assuming that Amazon must know a thing or two about her reading habits by now — an unusual blend of historical romance and theology — she took the bait. As soon as she realized what was what, she dropped them like a hot brick, and they have remained firmly closed ever since. I suggest the charity shop, but she says she’s too embarrassed to take them.

Now anyone who has followed the tale of Topaz and Cleft in my other blog, Mills & Boon Wannabe, will know that I’m not averse to a bit of escapist fiction, although I admit I have had trouble with the sex scenes. There aren’t any, yet. I thought this little exercise might lubricate my imagination enough to write Topaz ’n’ Cleft’s grand finale at last. It’s a fantasy I expect we all have, especially around six o’clock…

She looked up and her eyes widened as she saw what I held in my hand. No words necessary, we both knew that the time had come at last; the time to abandon ourselves to the desire we had been trying to ignore for too long; the time for utter fulfilment.

Her eyes were hungry as I slowly gripped the end and, with deliberate, circling movements, worked the bulbous tip. Tantalizing her, I held back for a brief moment before, with a grunt, I felt the first seep of liquid run through my fingers.

‘Don’t waste it! I need all you can give me!’ she gasped, luscious lower lip held trembling between her perfect teeth. ‘For God’s sake, fill me up.’

Smiling, I pulled away just as she was ready to take it all, knowing that the final surge of pleasure would be so much more intense for the delay. And then her voice came again, low and urgent:

‘Just give me the blinking champagne; I’ve had a hell of a day.’

I recently went to a Pizza Hut for the first time in over 20 years. Great value. Super salad bar, if you like cold pasta with white gloop on it. But a strangely worded menu.

Not that strange: pizzas are what you expect in a Pizza Hut, and pizzas are what you get. But I was struck by the proud heading ‘Posh Pizzas’. By posh they meant that these pizzas had toppings that you’d normally expect to find somewhere really exclusive, like Pizza Express or Zizzi. Prosciutto. Chanterelles. Red onion. None of your basic ham and pineapple rubbish; that was relegated to page two. And it occurred me how confused the current use of the word ‘posh’ is.

In the Pizza Hut context I suppose it’s meant to mean ‘sophisticated’, ‘upmarket’, ‘a little bit special’. But while posh is a compliment when it comes to food, it’s more often used as an insult. Even, in the case of politicians, a bona fide reason to disqualify you from public office, if the hysterical inverted snobbery directed at Cameron, Osborne et al is anything to go by. So people described as being posh splutter, strenuously deny it and protest their ‘ordinary’ credentials.

Not me. I once had a very charming evening in a club in Cambridge, huddled outside on a tiny balcony seeking respite from the din with a bunch of young clubbers I’d never met before in my life. ‘Cor, you’re so posh!’ they marvelled. ‘I’ve never spoken to anyone who speaks like you before! I can’t get over the way you talk!’

I suppose I could have countered with ‘And you’re so common! I didn’t know people really spoke like you! I never thought I’d make conversation with anyone so rough!’ I didn’t, of course; they were thoroughly nice people and I enjoyed laying it on thick. By the time I left I sounded like the Queen putting on her best telephone voice.

But it illustrated a puzzling point. Why is it considered offensive to allude to someone’s weight, plainness of face, colour — even BO — yet absolutely fine to discuss and even mock the way they speak to their face, if the way they speak is Received Pronunciation?

It’s all relative, anyway. What counts as posh in Pizza Hut would be seen as slumming it anywhere else. And what about Posh Spice? If she’s posh, I’d hate to see Common Spice.

Would you put the cosh to posh, or…  sorry, I’ve run out of rhymes. But I’d love to hear your views.
Posted by A Little Light Work at 12:00 pm 6 comments:

I’ve been tagged, and I’m thrilled; it’s like being asked to join the party. And when the tagger is SAHDandproud, that’s some party to be asked to join. His tagger was Tom Briggs at Diary of the Dad, so I thank him for throwing this bash in the first place.

It’s not a ‘come as you are’ party, but a ‘come as five well-known people you’ve been told you look like’ party. And that presents a problem: I have only ever been told that I look like two people. 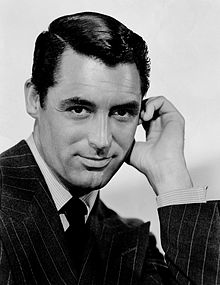 Strangely, no one has ever commented on the resemblance.

This is what, on a bad day, I think I look like: 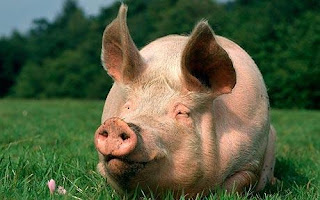 It’s the nose. I hate mine. 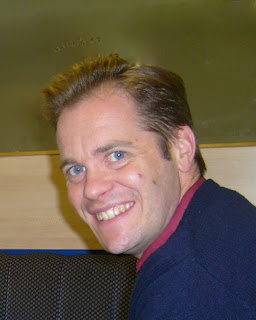 Now years ago, when my face was fresh and Neighbours was huge, I was apparently a dead ringer for Jason Donovan. Old ladies used to accost me in the library where I worked and croak ‘You know who you remind me of?’. One of them regularly called me Jason when it was my turn to stamp out her large-print Mills & Boons (this was in the days before barcodes and scanning and self-service).

See if you can spot the likeness. 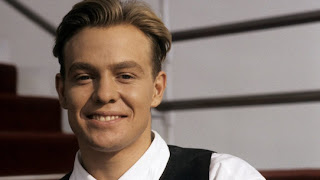 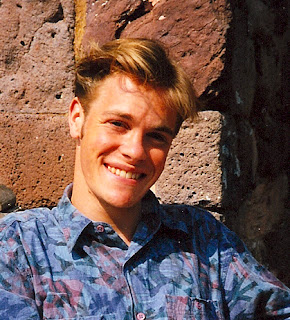 Fast forward a decade and a half, and the chief executive of the company I worked for said she had finally worked out who I looked like. Andrew Rawnsley. By this time Google had been invented, so I could see whether she was complimenting me or not. I decided not, but reluctantly concurred that she had a point. 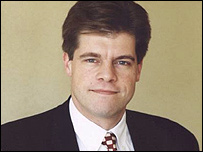 Then a month ago I had a nice man from John Lewis in to fix some blinds. On his first visit he said ‘You know who you remind me of?’ I waited nervously. ‘My cousin in Mauritius.’ Since he had no photo on him, I was unable to decide whether was a Good Thing or a Bad Thing.

On his second visit he said again: ‘You know who you remind me of?’

‘Your cousin in Mauritius?’

So it would seem to be official. The years may have taken their toll on our fresh faces and our hairlines, but Jason and I have still got something going… 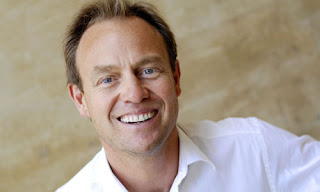 This party is a respectable one. Invitation only. So I invite these utterly brilliant bloggers to join in. Mainly because I'm curious to see what they come up with.

‘Daddy, when do you want to die?’
Momentarily winded, I surreptitiously checked that the eight-year-old’s head was not revolving through 360 degrees, her eyes were not spitting red fire. ‘Er, well, I don’t really want to think about it’ I answered, lamely.
She insisted. ‘All right, then: when I’m 86.’
‘No, I mean what day? I want to die on a Tuesday.’
I shouldn’t be surprised. We used to live in a house next to a cemetery – a beautiful Victorian one, with cedar trees and stone angels and a chapel. The Daughter loved to say goodnight to the angels she could see from her bedroom window. She learnt to walk tottering through the gravestones. Her first taste of freedom was speeding her tricycle through the yews and along the path to the cremation plots.
Now she likes filching a glass chipping or two off the odd grave; blue ones are her favourite, being rarer than green. ‘I hope blue ones are still in fashion when I get to be buried,’ she says.
It’s no use being shocked: most children seem to be fascinated by the macabre and are entirely open in their curiosity about death. So as long as it doesn’t tip over into morbidity, I’ll go with the flow. But I still don’t know why she’s chosen Tuesday.
Posted by A Little Light Work at 10:20 am 6 comments:

This is a big disadvantage when you’re a man, and I’m one all the time. Men are expected to love sport. They’re expected to live it. I loathe it.
This leads to awkward silences when the nice chap on the phone from Mumbai, faithfully following his crib sheet, says ‘It was a great match last night, wasn’t it?’, while I wait for him to fix my internet connection. It limits the banter on those rare occasions I’m allowed out with the boys. And it earns the contempt of my football-mad daughter.
Imagine my delight, then, when I found that the Olympics is going to be on my doorstep next month, almost literally. The time trial and road race cycle events are set to pass one end of my road and, four hours later, return past the other end of it. We will be prisoners for three days, unable to leave our street between 4am and goodness knows when.
I moaned at my friend Dazzle, who hates sport too. But Dazzle is gay, and said that being held prisoner by 100 sweaty men in lycra is his idea of a jolly weekend.
I moaned at my Hungarian neighbour, who can usually be relied upon to express sympathetic outrage at life’s inconveniences. But she has five boys and is glad of something that will get them out of the house without having to hire a bus.
I moaned at my wife, who said that I’d better watch what I say in case the Stasi cart me off for contravening the diktat that we are to embrace the Olympics whole-heartedly.
So I did the only thing I could do, and booked our family holiday for the whole Olympic fortnight. We leave the day before the lycra lock-in begins. And today I realised that I’m missing the most exciting thing to happen in my corner of suburbia since I got chatting to the lady in charge of flowers in Tesco and found that she’s the ex-wife of Gregg Wallace from Masterchef.
At last, the Olympic flame has been kindled in my heart, and it’s too late to rearrange the holiday.
Posted by A Little Light Work at 6:52 pm 10 comments: